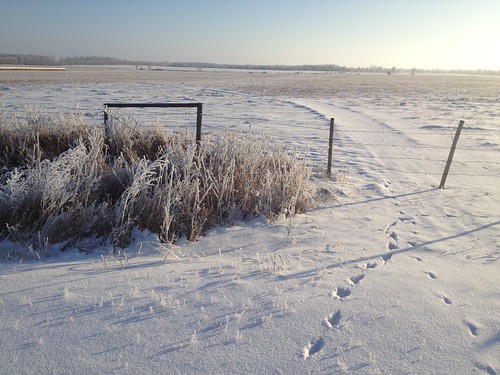 It’s two o’clock: the woman gazes out
into the storm, wind driving the snow
into deep drifts along fences. You know,
he said that morning before going out
into the blizzard to check the cattle
huddled behind the wind-break he built three
summers ago, while she, sipping ice-tea,
sat under the maples, listening to the rattle
of the wind-chimes he had bought for
her last birthday, too large to move, the sun
too hot, just waiting, waiting for the day
her child would be born, and later on two more,
twins; You know, he said, reaching for the gun
to shoot the coyote, You’re beautiful today.

Note: I’ve been at the farm for the past few weeks, and the frost last week was beautiful. I was out taking photos, and this photo, of the gate and the grass in the sun, made me think of this poem – one of the very first poems I had published, in a little magazine called diverge that has since disappeared. The poem itself grew out of a writing class exercise to write a sonnet.

2 thoughts on “Going out into”