I am home, and home is beautiful.

I have spent much of this week recovering from jet lag, slowly unpacking, reintegrating myself into regular life, thinking about my routines and how I want to shape my time this fall. Admiring the last of the golden leaves and being grateful that they hung on long enough for me to see them.

I have also been thinking about how to unpack seven weeks worth of experiences. I am not sure where to begin, and so instead of putting off beginning, as I am often inclined to do, I am going to just start, with a single moment:

this place
has been sacred
for millenia

in the air
in the ground

in the prayers
that linger
for centuries 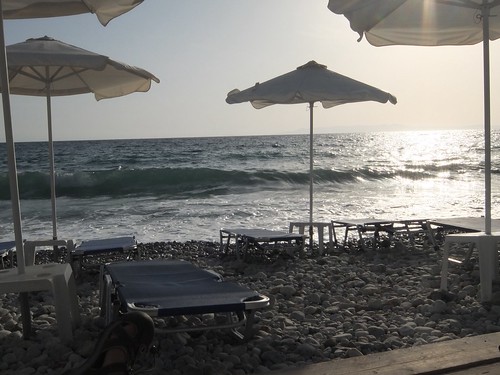 This morning I woke to the pleasant discovery that I was in my own bed, for the first time in almost seven weeks.  My travels over the past 47 days have taken me to three countries (Iceland, England, and Greece) and have filled me with inspiration from amazing new adventures.

Although I did not manage to post here while travelling – I discovered that I need more time to process my thoughts about each place than life on the road allowed – you can be sure that my experiences will find their way into my writing here over the coming months.

Thank you for reading.

Photo: The view from Yialos, my favourite cafe and writing haunt in Kardamyli, Greece.

I find myself thinking about my grandmother at this time of year, as her birthday approaches. It is bittersweet, because I missed her last birthday, the one she walked to the grocery store to buy the ingredients and baked the pies for herself. I had been away from home for five months already, working in London, and was backpacking through Europe. I remember calling home from a pay phone in Amsterdam to wish her a happy birthday. This #throwbackthursday poem is about the next spring and early summer, when I was living in her house and working at the local library.

This poem was previously published in Home and Away: Alberta’s Finest Poets Muse on the Meaning Of Home, a poetry anthology I co-edited with Dymphny Dronyk.

at the end of the lane
I crossed the street
continued past Mrs. Hertz’s place
with its jungle garden
kittens playing tigers
and down the block
to Grandma’s house

past Mrs. Hertz’s house
now empty
her twenty-two year old cat
put down after a neighbour
found the woman dead

I’m still on the road but starting to think about home.

I wrote this #throwbackthursday piece for a creative non-fiction writing course in my second year of university. My father used to joke that he didn’t care if we missed Father’s Day or his birthday, as long as we came home to help pick rocks. (A secret: I haven’t had to help pick rocks in years… after all that hard work, it has become a non-event.)

Listening to the Morning

Saturday dawns clear, bright, hot. Sunlight pours through the east bedroom window, refracted into a dozen tiny rainbows by the prism hanging from the curtain rod. Through the open window I can hear robins chirping, the rooster crowing, hens clucking, the dogs growling at each other, Dad calling the cow in to be milked. Downstairs, Mom is making breakfast. A perfect May morning. The breeze blows through the room, rustling loose papers on the desk. Mom’s footsteps are on the stairs; there is a knock on the door, telling me to get up.

Two hours later, I stand under the morning sun in a recently plowed field, holding a five-gallon pail. To ward off sunburn I wear work-gloves, a long sleeved shirt, jeans and sun-screen, which later I discover I have forgotten to apply to the back of my neck. The wind is beginning to pick up; soon it will be tossing dirt into my eyes and hair. By four this afternoon, when we are finished, I will be covered with fine dust, my shoes will be filled with soil, my socks black. My hands and back will ache, the handle of my pail will be bent, and I will argue with my brothers over who gets to use the shower first.

When I was eleven, Farm Credit foreclosed on our long time neighbours, forcing them to sell their land. The two quarters with the house and barn, a mile down the road from us, were bought by a hobby farmer/air-conditioning repair man from Onoway. My parents took out a loan and bought the quarter adjoining our land, increasing their holdings to a section. That Sunday afternoon, after the neighbour had come, and gone away with a written agreement and a check for the down-payment, we all piled into the truck to go look at our new acquisition. The 140 acres had been rented out for the previous decade, but had remained uncultivated that year because of the foreclosure, producing only a crop of weeds. Dad looked around, proud: there’ll be a few rocks, but it’ll look better after it’s worked up.

It didn’t. No one had picked rocks on that quarter for years. Every year, whoever was renting the land, just worked over, and in some cases, around the rocks, digging up new ones with each cultivation. The lower land, down by the muskeg, looked rich and relatively free of stones which get caught up in and damage machinery. But up on the hill the rocks were thick and large, giving it the appearance of a quarry rather than that of a future hayfield. Dad was disgusted, but optimistic: it would take work, but it would get better.

Work, yes, but it seemed that it would never get better that first fall when Mom and Dad hired the neighbour’s son, David, to help because my brother, Richard, and I weren’t much help yet. But we did work when we weren’t in school, because any rocks we picked, Mom, Dad and David didn’t have to. The system was simple: Richard and I took turns driving the tractor up and down the length of the field, the others spread out, two on either side, tossing rocks into their pails. When full, or too heavy to carry, the pails were dumped into the loader and filled again. Rocks too large to be lifted by hand were hoisted out of the earth with the front-end loader. When the loader was full, it was dumped into the grain truck waiting at the end of the field.

It took four days, that first time, to pick the rocks. Four days in the cold October wind, wearing ski jackets, scarves and boots. And when we were done, it looked almost the same as when we started. The hill was still splattered with boulder-sized rocks, left over from a giant’s game of marbles. All we had to show for our work was several tons of rock dumped into the river to make a crossing for the cattle.

The next spring, the same, except the cold was replaced by the blazing sun which beat down on us as we tracked up and down the field, following the wheel marks left by the harrows. Wind swirled the dirt around us, into eyes, ears, hair. The hot lunch Grandma cooked back at the house tasted like the grit between my teeth. When we were done, after four days in the heat, my back ached, my hands were blistered, I had a sunburn, the handle of my pail was bent from the weight of rocks, and the field looked a little better.

The next time, it only took three days. Then two. Dad stopped hiring David, and my younger brother, Christopher, started to help by driving the tractor. Now, it only takes an afternoon to walk up and down the field, picking up the largest rocks, rocks that eight years ago we would have skipped over for being too small. Yet lying in bed, listening to the morning, I still dread the sound of footsteps on the stairs and the weight of the pail in my hand as I move up and down the field, remembering.