Sounds romantic, doesn’t it? I can imagine watching dense forests and ripe wheat fields pass by while sipping a glass of wine a the luxury restaurant car.

During a recent visit to Calgary’s Heritage Park, I was reminded that all of my great-grandparents, and three of my grandparents, made this trip in much different conditions after landing as new immigrants in either Halifax or Quebec City. 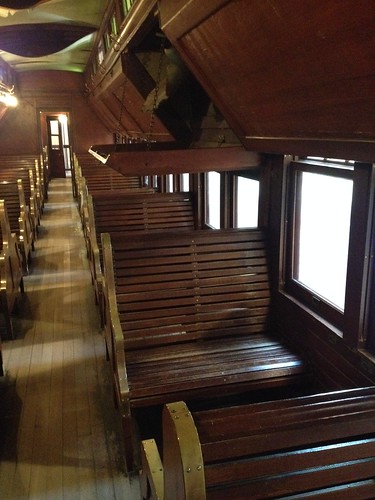 The sign outside the car pointed out that “these second-class cars, with their wooden slat seats, cookstove, and tank of water, provided necessities rather than comforts.” Even so, for the Stengel family, which included my grandmother Olga (then an infant), the $7.00 fare per person – even if the children rode for free – would have been a significant expense, considering that the family had only $60.00. I doubt they would have splurged the additional $2.50 to purchase bedding for the sleeping berth.

What did my great grandparents, Karolina and Frederick, think about as they began to realize the immensity of their new country? Did they voice their thoughts to each other? Where they excited? Hopeful? Frightened? I’m certain I would have been all of the above.

I love to travel, but I wonder if I would have had the courage to leave family behind and move halfway across the world, never to return “home” again. Even as that question enters my mind, I know it is not a fair comparison: they had very little to lose when they left Volyhenia, Russia, to come to Canada.

Here is my version of the family legend:

Coming to the Promised Land

He said, “This is our chance. We can make a better life for ourselves and our children. We can stay with my brother and his family. They have lots of room.”

So he sold the two cows that hadn’t died during the winter and bought tickets for the five of us: Frederick, his younger brother Julius, me, Henry who clapped his hands in excitement when we told him we were going on a ship, and the baby. I thought I would die in the belly of that ship, the Hesperian, as it belched smoke across the Atlantic and I lay curled up on our cot, seasick, while Henry toddled around playing with the other children.

Then there was the train. The journey I thought would never end, the journey west, west, west, through the rich Ontario farmland where I wanted to get off, but he said, “no, there is no free land here.”

Through the rich farmland into the barrenness of the prairie where no trees grew, and still we kept going. We kept going until we came to Edmonton, where his brother waited to take us on to Millet, the brother who had lots of room.

His brother’s wife said, “We have no room. But you can have the old chicken coop.”

So I cleaned out the shack with a pitchfork and I swept and I washed and I begged some paint from the brother’s wife and I painted. And we called it home.

I waited for a better life. But there was no free land, not here. To get the land we would have to travel far away from the towns to where there was no one. We would have needed supplies: horses, seed, a plow. The money from the cows was already spent.

He said, “Things will get better after I find work.”

I wasn’t sorry we had come. What was there for us in Russia? Nothing, not even the house we had lived it: the landlord’s men tore it down the morning the lease on the farm ran out. Frederick’s family had farmed it for ninety-nine years, but the only land they owned was the bit that was caught under their fingernails.

That first year, he would come home, his shirt soiled with sweat from the long hours in another man’s field. He would sit at the table, head in his hands, too tired to eat the supper I had cooked hours before. We would sit on the step, our children asleep inside, and look at the stars, dreaming of a farm of our own.

After a while, I would put my hand on his shoulder and say, “This is our chance.”

One thought on “Across Canada by train”